Watching the writer at work on Deadly Lullaby

BooksChatter met up with Robert McClure, the author of the new crime fiction thriller, Deadly Lullaby, for an interview to find out what inspired him to write the book, what makes the book unique, whether his novel reflects any of his experiences, and more (click here).  When asked to describe his writing process, McClure responded: “In a word, boring.”  McClure said he rises very early to write, usually at 5:00 a.m., but often earlier with a lot of interesting and even weird thoughts swirling around in his head.  But, he said that “[t]he mechanics of the process is boring to watch: I just sit at the computer and stroke the keyboard.”  But one creature has been at his side during the entire process to watch it all . . . 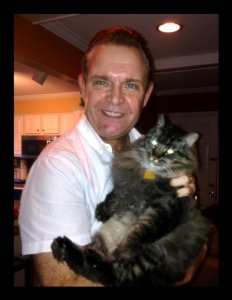 Ricky says it’s a really good read, even though the author, his “servant”, ignored requests to include him in the story.

Order it on-line now for only $2.99 from any of the following eRetailers: