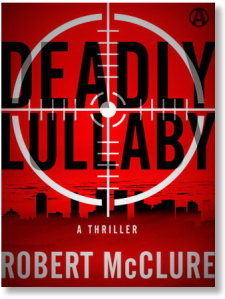 Robert McClure has written a rollicking debut novel of family and felony in Deadly Lullaby, a crime fiction thriller.  Published by Random House and Alibi (its mysteries and suspense division), Deadly Lullaby was released as an eBook yesterday (9/29/2015). McClure skillfully weaves a story of a father’s love for his estranged son and the son’s struggle to love his father back while fighting the underbelly of organized crime with a mob hitman for a father.

Frankly, this blog post’s author has never read a story like Deadly Lullaby with such trepidation for what might lie ahead for its main characters. The story picks up speed at such a whiplash pace toward the middle that I found it hard to put down until learning whether “Babe”, the father, manages to reconcile with Leo, his son, amidst tangles with the Italian mafia, a Russian drug lord and an Asian mobster.  The story is set in Los Angeles. (Not to dis L.A., the beautiful City of Angels, but the author’s hometown of Louisville, Kentucky, is not a likely back drop for a story that leaves a trail of mobster corpses.)

Calmann-Levy, which is publishing Deadly Lullaby in France next year, paid McClure to write a sequel, which he has already begun.  Slovakian publisher Ikar and Czech publisher Eromedia, also purchased rights to publish Deadly Lullaby.

McClure has received previous accolades for his short stories, including “My Son” on which the novel Deadly Lullaby is based. “My Son” was published in Best American Mystery Stories 2009, edited by Otto Penzler with guest editor Jeffrey Deaver.  To read more about McClure’s previous works, click here.  For more back story on writing Deadly Lullaby, read BooksChatter’s interview of McClure, click here.

Available as an eBook from any of the following digital retailers.  Order it today!